What is a Master Franchise?

A master franchise is an entity that has control over all franchising activities in a designated area.

Being a master franchise means that the brand owner has  granted you the right to run all the franchise’s operations within your jurisdiction. This is a very common practice among big brands, such as McDonald’s and Dairy Queen, which have so many locations that it would be inefficient for their corporate headquarters to oversee them all. By designating another entity as master franchise, they pass on the task of managing individual locations as well as that of opening up new ones.

These responsibilities include, but are not limited to:

Having assigned business operations in various regions to master franchises, the brand owner becomes what we call the master franchisor. As such, they oversee each master franchise in the same way that the master franchises manage the stores within their designated area. With this in mind, we being to see the pyramid structure that connects each store to the very top. Initiatives move downward from the top, and royalties go the opposite way. 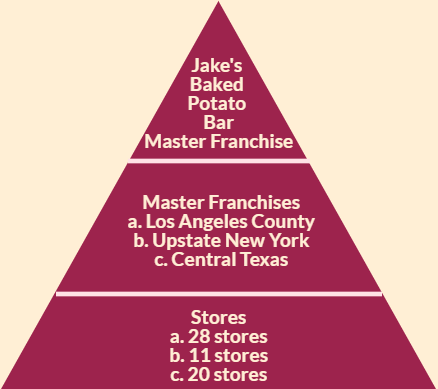 Area developer is a term that is more or less interchangeable with master franchise. Certain organizations may prefer one term over the other.

A master franchise is also called a master licensee, especially in cases where the territory they oversee is an entire country.